A million Euros’ worth of cars drawn by Olympic 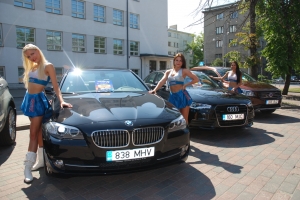 Olympic Casino will draw the fiftieth car in Reval Park Hotel & Casino in Tallinn today on July 11. The cars drawn in the last fifteen years are worth nearly a million Euros.

“As far as we know no other enterprise operating in Estonia has put up such a large number of cars worth so much as prizes. Fifty cars are already a decent-sized car pool and there have been all kinds of cars, ranging from small cars to the most luxurious top models,” stated Aigar Hain, the CEO of Olympic Casino Eesti AS.

Since 1998 Olympic Casino has drawn two luxurious or several smaller cars among its customers every year. The cars put up as prizes have included for example Audi A5 Sportback, 5th series BMW, Volvo XC60 and Range Rover Evoque. The most valuable main prize was the top car of the Mercedes range worth more than a million kroons.

The wins have been distributed to nearly all the counties in Estonia. Actress Liina Tennosaar for example won a silver Audi A6 worth more than 40,000 Euros at the draw a year ago.

For the last few years the cars put up as prizes have been displayed publicly on the special stand installed in front of the main entrance of Reval Park Hotel & Casino.

The iconic SUV Jeep Grand Cherokee will find its new owner at the draw taking place tonight. The draw will start in Reval Park Hotel & Casino in Tallinn at about 20:00 p.m. and it will be is broadcast to all Estonian Olympic Casinos.

In order to take part in the car campaign the customers of Olympic Casino had to play with their client cards and collect participation tickets in the period of six months. The tickets could also be acquired by playing casino games or poker at Olympic Online. Just one lucky ticket is needed for winning.

Olympic Casino is the leading provider of casino entertainment in Estonia, operating 18 slots casinos in Tallinn, Tartu, Pärnu, Narva and Jõhvi. Founded in 1993 the company now employs nearly 530 people. Olympic Casino is a full member of the European Casino Association and a major sponsor of the Estonian Olympic Committee.