Bar ladies of Olympic Casino among the winners of the Estonian Barmen’s Championship. 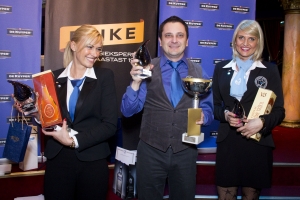 Once again the bar ladies of Olympic Casino demonstrated their high level of excellence by winning the second and third places at the Estonian Barmen’s Championship.

The winner of the classical category was Helger Aava, barista of Jungent Estonia OÜ, and the best of the show category was Georgi Voomets, barman of Club Hollywood.

Congratulations to the winners!