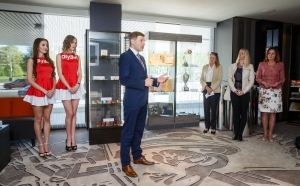 A display of the brightest medals of the Estonian volleyball history was opened in the Olümpia OlyBet Sports bar in Tallinn today, immediately before the World Championship qualification tournament begins.

In addition to the Moscow Olympics Gold won by Viljar Loor and his numerous other medals from the ’70s and ’80s you can also view rare gold medals won at the USSR Championships in 1968, the winner's cup awarded in beach volleyball to Kristjan Kais and Rivo Vesik at Zagreb World Cup in 2007 and the European Cup brought home by the current national team last year.

“The display is naturally focused on Viljar Loor, whose achievements and number of medals will probably never be surpassed. However, it was also a notable achievement for the Estonian sports history when the Kalev team won the title of the champion of the Soviet Union earlier in 1968. This event is represented in our display by the small gold medals of three players and the first place diploma of one of the most talented volleyball players ever – Peet Raig,” remarked Kaarel Antons, Chief Treasurer of Estonian Sports and Olympics Museum and one of the organisers of the display.

“Volleyball is now the most successful ball game for Estonia and also the most popular one, if the play of the national team will match their actual level at the three major tournaments this year. Although it might seem incredible for a team sport, but it isn’t completely out of the question to win more medals in volleyball,” said Hanno Pevkur, President of the Estonian Volleyball Federation.

The Kalev team was the Champion of the Soviet Union and the display includes the gold medals of Tarvi Uljas, Henn Karits and Kalle Kukk, and the first place diploma of Peet Raig from the same tournament. To mark the titles won in this century the display includes the victory of Kristjan Kais and Rivo Vesik in beach volleyball World Championship phase in Zagreb (2007) and the European League cup (2016). In Tallinn you can also see a competition shirt and a fan shirt from the time of the first Estonian Republic and nowadays.

During the World Championship qualification and World League tournaments, the display is open in the OlyBet Sports bar in Olümpia hotel that is quite close to the Kalev sports hall. In cooperation with Estonian Volleyball Federation, it will be the so-called volleyball Fan House for the duration of these tournaments. There you can watch the games being played in Kalev sports hall thanks to the partnership with Estonian Media and on Saturday, May 27 the members of the national combined team will sign autographs there after the game with Hungary.

Earlier there have been in Tallinn displays of medals won by Estonian athletes at the Winter Olympic Games and Paralympics, and by Erika Salumäe, Heiki Nabi, Kristjan Kangur and others, organised in cooperation with Estonian Sports and Olympics Museum or national sport federations. An impact-proof secure cabinet made by special order for such exhibitions has been installed in OlyBet sports bar and it is under security surveillance.

This week the national volleyball team will start to fight for its ticket to the World Championships, in the beginning of June they will have their debut at the World League and in August, they will face the final tournament of the European Championships in Poland.