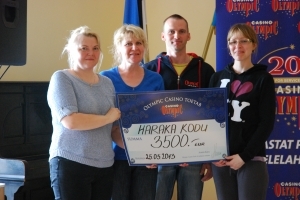 Olympic Casino AS employees lent a hand at the Haraka Kodu community work project this weekend and handed to the Haraka community €3,500 to set up a new sensory room.

Nearly 30 people from Olympic Casino and other friends of Haraka Kodu gathered to take part in the community work project to clean up the surroundings and hand over €3,500 donated by the company to support the setting up of a new sensory room.

“A sensory room is a special room for treating and relaxing the senses with light, sound, smell, sensation and experience. There are colourful lights to stimulate the sense of vision, colourful bubble tube, salt lamp and lots of other devices. In a sensory room it is possible to either stimulate or calm the senses as necessary. Above all it helps develop, refine and consolidate various sensations,” explained Kille Alterman, the general manager of SA Haraka Kodu.

“In addition to the community work the company also set up a collection where the employees of Olympic Casino could add their personal contributions. The collected money was used for buying plants and making flower beds, crafting boxes for herbs and clearing paths,” said one of the volunteers for the community project Aigar Hain, the Manager of Olympic Casino Eesti AS.

The volunteers for the Haraka Kodu community project were entertained by Elina Born – one of the participants of the TV series "Estonian Idol: The Search for a Superstar", accompanied by Stig Rästa on guitar.

Haraka Kodu is a community for people with intellectual and multiple disabilities operating on the basis of the family model. Haraka Kodu provides community living, round the clock care and enhanced support care, working support and rehabilitation as services to people with disabilities.

Founded in 1993 as a subsidiary of Olympic Entertainment Group, Olympic Casino Eesti AS is the leading provider of casino entertainment in Estonia, employing nearly 530 people. Olympic Casino is a full member of the European Casino Association and a major sponsor of the Estonian Olympic Committee. Olympic Casino also runs a sponsorship and charity programme in support of various social, cultural, education and sports projects.