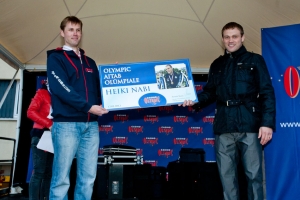 Estonia opened its medal tally at London Olympics when Heiki Nabi was awarded the silver medal in Greco-Roman wrestling in the heavyweight category.

In the final match Nabi met Mijain Lopez Nunez of Cuba, who has already won the gold medal in Beijing and is also a four-time world champion. The Estonian lost 0:3.

In the first period the judge gave them both a warning for passivity when they had wrestled for 1.10. 20 seconds later Nabi went to the "par terre" position and at 1.44 from the beginning of the match the Cuban scored with a so-called gut wrench.

The Estonian was more active in the second period, but Lopez Nunez had a good defensive position for a minute and a half. Then the judge sent him to the "par terre" position, where the Estonian could not manage to get the Cuban star off the ground.

After the free opening round Nabi won the Byelorussian representative Ioseb Chugoshvili 3:1 in the 1/8 finals and Lukasz Banaki of Poland 3:0 in the quarterfinals. In the semifinals Nabi met Johan Euren of Sweden and won the match 3:1. In the finals Nabi meets Mijan Lopez Nunez of Cuba, defending his title of the Beijing Olympics.

Image of the Rock Ride Party on May 12.