Krista Meri – the winner of the cocktail competition Saaremaa Vaarikas! 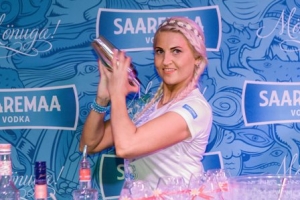 The record breaking number of 47 barmen took part in the competition for the best barmen in Estonia. According to the main organizer of the event Kätlin Holm, the Branding Manager of Saaremaa Vodka, this was the individual competition with the greatest number of barmen ever carried out in Estonia. “It was truly great to see so many participants and their truly great input to making these cocktails. The level of our barmen and bar ladies is very high and it was far from easy to pick the winners. We would like to thank all participants and hope that the art of making cocktails will continue to develop at a fast pace and our barmen will hold our national flag high on the international level as well,” stated Holm.

The title of the best young barman was awarded to Sigrid Sarv from the cocktail club Bibabo, the third place went to Marge Mänd (restaurant Cru) and the second place to Marten Musta (Klubi Teater). The winner was Krista Meri – the best bar lady in Estonia whose roots are also firmly anchored in Saaremaa. Next year her recipe of the winning cocktail MO(O) SUI MAMM will decorate the bottle of the raspberry flavoured Saaremaa Vodka.

The awards were specially engraved vodka decanters for the best young barman and the winners of the first, second and third places. The top three received travel vouchers as well. The winner of the first place received a voucher worth €700, the second worth €200 and the third €100.

Recipe of the winning cocktail by Krista Meri: