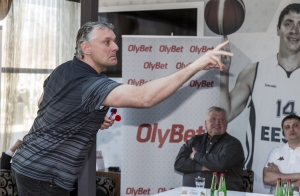 Before the semi-finals of the Alexela basketball champions’ league a press conference was held in the OlyBet sports bar in the Kristiine centre where the chief coaches of TÜ/Rock, Kalev/Cramo, Rakvere Tarvas and Tallinn Kalev had a chance to voice their thoughts. The event also included a fun game of darts with Jüri Ratas, the President of the Basketball League, taking part in addition to the coaches. Gert Kullamäe left the game as the winner after his clear win of the final match with Alar Varrak. Journalist Peep Pahv was the best in predicting the results of the darts games and received for a prize a sports fan poker package from Olympic.

View the gallery of the press conference here