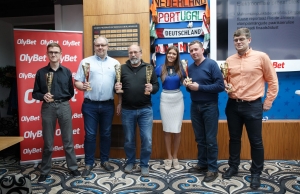 The Estonian Sports Journalists' Association announced the best sports journalism stories, broadcasts and photographs of the year 2016. For the first time in the history of the sports journalism awards, the Estonian Paralympics Committee issued an award for covering parasports this year.

"The competition showed that the Estonian sports journalism is in a briskly toned shape, as it is able to and dares to find original viewpoints to discuss important and interesting topics. There were strong nominees in each category, but there was no doubt about the winners because all the award winners collected at least 75% of the possible points from the jury," ESJA President, sports journalist Ott Järvela commented on this year's competition.

The Best Sports News Award was won, just like last year, by Jaan Martinson, journalist at Eesti Päevaleht and Delfi, this time for an article titled "Tomorrow, EOC distributes extra state funds for sports, which have in fact been distributed in advance". Jaan Martinson earned this year a total of two sports journalism awards - the second award came in the Written Press Overview Article category, for the article "Sõõrumaa beats Ratas with a three-point goal in the final second".

The Best Sports Commentary was written for the second year in a row by the current Eesti Päevaleht and Delfi sports department manager Peep Pahv, whose victory commentary, "Dance or score" was published in 2016 in Postimees.

The Best Sports Photo Award went for the second year in a row to the same journalist too – the author of the best sports photograph of 2016 was once again Postimees photographer Tairo Lutter, this time for a photo taken of Nikolai Novosjolov at the Rio Olympics.

The Written Press Publicism category was won by Eesti Päevaleht and Delfi sports department sports journalist Andres Vaher with the article "Paul Keres. A human being. A mental genius. A symbol of Estonianhood. But a victim of an era".

In the Electronic Press Publicism category, the winner was Ivar Jurtšenko for the Delfi portal's Basket TV episode "Power games in women's national basketball team – was the harsh accusation against Heino Rebane a fiction?".

The beloved ETV sports reporter Lembitu Kuuse, who passed away in January, made the 2016 Best Electronic Press broadcast. He brought to the Estonian sports fans and provided comments to the performance of the Estonian rowers at the Olympic Games. Lembitu Kuuse's award was accepted by director of the broadcast Eha Väinsalu.

The names of the winners were added traditionally to the sports journalists' Hall of Fame slate on the wall of the OlyBet sports bar, which was inaugurated during the award ceremony three years ago by Estonia's top wrestler Heiki Nabi.

"The choice was very difficult to make. After all, the classic "game progress" reports can be read almost every day, but sometimes the longer, analysing pieces that one could even say deserve more attention, stay unnoticed because they get to be pushed to the end of the page by the avalanche of news. Some articles I read for the first time while doing the jury work and I am pleased to state that many of the stories that deserved a nomination were very well written or presented, and showed the stronger side of the Estonian sports journalism," said jury member, Olympic medallist Kaspar Taimsoo.

This year, a special award of the Estonian Paralympics Committee for covering the parasports movement was issued, which the Estonian National Broadcasting (ERR) sports editorial staff won. "We consider it very important and necessary that the achievements of our athletes receive media coverage. The high-level sports of people with special needs are very professional and the results of the athletes cannot be underestimated. The ERR sports editorial staff has been a good partner for us - in addition to the news that were reported, ETV made it possible watch the opening ceremony and an overview broadcast of the Rio2016 Paralympic Games. I hope that such cooperation continues and that other media outlets will give our athletes a chance," said Urmas Paet.