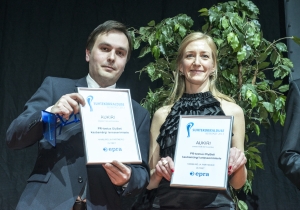 According to the EPRA jury the OlyBet launch was outstanding by its creativity and original implementation, outshadowing any other projects. As any advertising is strictly restricted in the area of the trademark the effectiveness of the launch depended primarily on the public relations management.

The launch of OlyBet included the opening of a chain of sports bars, starting a series of exhibitions of Estonian athletes in Kristiine Keskus, a series of TV clips introducing Olympic sports in cooperation with TV3 Seitsmesed news programme, partnerships with Estonian athletes and sports organisations, and ongoing communication activities.

The best in the public sector category was the project Veteran’s Day by the Ministry of Defence, and SEB in the category of internal communication. Special prizes were also awarded to Tallinn University for educational communication, Estonian Agricultural University for scientific communication and the Seaplane Harbour for location marketing. The awards ceremony took place at the greatest marketing event of the year Password.