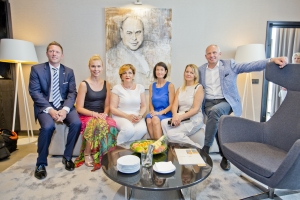 Today the Chairman of the Supervisory Board of Olympic Entertainment Group, Armin Karu, general manager of Hilton Tallinn Park Hotel, Daniel Habersatter, and Ariel Klas festively opened the suite dedicated to maestro Eri Klas in the new Hilton Tallinn Park Hotel. The luxurious hotel room is made special by personal items that once belonged to Eri Klas and were selected together with Ariel Klas.

Armin Karu said that he and his good friend Eri agreed already a few years ago that there will be an Eri Klas Suite in the new Hilton hotel in Tallinn. "This was his neighbourhood - starting from his childhood home near the park, attending school in Raua street until his first job in Radio House. The circle was completed in the last few years of his life when Eri again moved to a house on the corner of Raua street and was excited already by the idea that he can host his good friends from all over the world in a Hilton and in the suite named after him," said Karu. "It's terribly sad that he left us before it was completed. But today we will add a very special hotel suite to Eri's bench in the Politseaia park in front of the hotel to commemorate and honour his work of life."

Speaking at the opening ceremony, Ariel Klas said: "When Eri was offered to have a suite named after him in Tallinn Hilton, he did not hesitate long and happily agreed. This suite is a worthy memory of a man who during his life as orchestra conductor in more than 100 countries stayed in different hotels, including those that belong to the Hilton chain. The Eri Klas Suite is continuing his mission as the ambassador of culture. Guests arriving in Tallinn can now study the heritage of this famous Estonian conductor and appreciate our culture."

Hilton Tallinn Park Hotel that opened doors at the beginning of June has 202 rooms, of which 27 are modern high-class suites. On the highest floor of the hotel is a first-class business lounge. The hotel has a conference centre with ten top-level meeting halls and one of Tallinn's largest banquet halls, a spa with an indoor pool and a restaurant with a bar and a terrace. The hotel is operated by Hilton Worldwide.

On the ground floor is OEG's new flagship casino Olympic Park Casino with separate areas for slots, gaming tables, tournament poker and VIP players, a bar with a stage and a sports betting lounge.