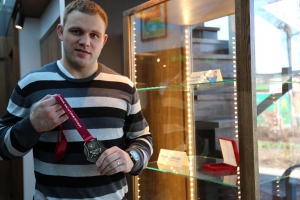 Double World Champion Heiki Nabi opened an exhibition of medals in the OlyBet sports bar in the Kristiine centre in Tallinn with two World Champion gold medals and an Olympic silver medal displayed up to the end of May.

The exhibition is centred on the long expected second World Champion gold medal won by Heiki Nabi last year in Budapest that arrived recently in Estonia.

“The wait was certainly long and emotional. Now that I finally have the Budapest gold in my hands I am happy to share the emotion with all my fans who have rooted for me and waited just as tensely for the homecoming of my medal,” said Heiki Nabi while placing his second gold medal in the display case.

Nabi mentioned that the belt accompanying the World Champion’s medal hasn’t arrived in Estonia yet, but when it comes it will certainly be added to the display as well.

In addition to the Budapest gold the best wrestler in the world brought to the Tallinn exhibition his gold medal won in 2006 at the World Championship in Guangzhou in China and his silver won at the 2012 Olympics in London. Besides the medals the exhibition features the cup and the belt added to the champion’s title and the medal in China.

An impact-proof secure cabinet made by special order for such exhibitions has been installed in OlyBet sports bar and it is under security surveillance. Three of its four shelves are now occupied by trophies won by Heiki Nabi, but the athlete hopes to produce an item for the final shelf as well. “It is quite possible if my health stays fine, I have no injuries and my training progresses as planned,” said Nabi optimistically at the opening of the exhibition.

The OlyBet sports bar in the Kristiine centre is setting up exhibitions of Estonian sports relics all year round. In the beginning of the year the bar showed a display of Erika Salumäe’s medals brought from the auction in London. Estonia’s finest Winter Olympic medals – gold by Andrus Veerpalu, silver by Kristina Šmigun and bronze by Jaak Mae – could be viewed in the bar immediately before the Sochi Olympics.