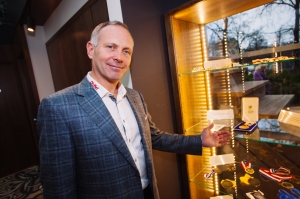 For the first time you can view the collection of medals won by Erika Salumäe, including the Olympic Gold from the Games in Seoul, displayed in the OlyBet sports bar in the Kristiine Centre in Tallinn.

The exhibition also revealed the people who took part in the action of buying the medals back: in addition to Neinar Seli the purchase of the Olympic Gold medal was funded by Armin Karu and Märt Vooglaid, in equal parts. The Olympic Gold medal was auctioned in London in the beginning of November and together with the service charges of the organisers and the VAT the total price amounted to more than 37,000 Euros. The rest of the medals were bought by Aku Sorainen, Toomas Prangli and Pekka Puolakka, partners of law firm Joakim Helenius & Sorainen.

According to Armin Karu, the Chairman of the Board of Olympic Entertainment Group AS, the medals nevertheless do not belong to the people who supported the repurchase. “Estonia is the true home of these medals, they are part of our sports history and belong to all the fans of Estonian sports who will now have the opportunity to view them in Tallinn up to the beginning of February and then in the Estonian Sports Museum in Tartu,” said Mr. Karu.

“The value and significance of Erika’s medals have grown in time. These medals have given us a powerful experience even now – a quarter of a century later,” Mr. Karu added.

“Erika’s medals are emotionally very important to me personally as well; I have been competing in track cycling in my youth and naturally a lot of us were at the Tallinn Town Hall Square in 1988 to welcome Erika Salumäe and Tiit Sokk back from the Games,” continued Mr. Karu.

The exhibition is open in the OlyBet sports bar in the Kristiine centre. It is separated from the casino and thus open to visitors without the need for prior registration. Although regulations require that any visitors of a sports bar must be 21 years of age or older. The medals won by Erika Salumäe have been displayed in an impact-proof secure cabinet made specifically for the exhibition and it is under security surveillance. The collection has also been insured.

The display of Erika Salumäe’s medals will be open up to the beginning of the Sochi Olympic Games. After that they will be transferred to the Estonian Sports Museum and a new exhibition will be opened in the Kristiine OlyBet sports bar.

You can watch a video about the medal collection here.