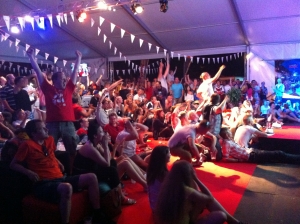 OlyBet Sports Bar was present at the Õllesummer festival and this year quite prominently. The largest sports bar in Estonia extended over the area of nearly a thousand square metres, divided into a spacious open air area and a large covered space featuring our well known bar ladies working in the Olympic Casino Olümpia, including the double World Champion Krista Meri. There were naturally large screens installed on the walls of the sports bar  for watching the football World Cup games. In the OlyBet area one could also make bets, take part in the penalty kick competition, test one’s knowledge in a grand football quiz, and play Roulette or Black Jack.

The football bronze medal game this Saturday was cheered on by Merlyn Uusküla, A.Le Coq drums band and OlyBet dancing girls. The weather was fine, football was exciting and the sports bar was packed with people – true summer and Beer Summer at its best!