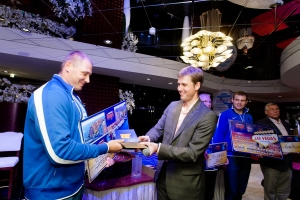 Olympic Casino as one of the major sponsors of the Estonian Olympic Committee awarded Heiki Nabi and Gerd Kanter with luxurious holiday trips to Las Vegas and Monte Carlo. The award trips were presented to the Olympic heroes on Thursday at a festive reception in Tallinn.

“We have been supporting the Olympic movement for years and we can be proud and happy about the results,” commented the Chairman of the Board of Olympic Entertainment Group Mr. Madis Jääger, saying that after doing such a great job they should also have a holiday worthy of the effort and that is the reason for choosing luxurious holiday trips as prizes for the medal winners.

Olympic Casino also expressed its appreciation of the efforts of the coaches as well by giving cash awards to Vesteinn Hafsteinsson, the coach of Gerd Kanter, and Henn Põlluste and Aleksander Jairus, coaches of Heiki Nabi. The main prize of a raffle organised for the huge audience was the “bronze-winning” competition shirt that Gerd Kanter wore at the London Olympics and the lucky winner turned out to be Nabi’s coach Henn Põlluste.

The Olympic heroes told stories about the games and signed autographs at the emotional reception held in Reval Park Hotel & Casino. The programme also included music by Birgit Õigemeel.

Olympic Casino as a major sponsor of the Estonian Olympic Committee employs more than 400 people in Estonia and last year paid more than €4.3 million in gambling taxes in Estonia.