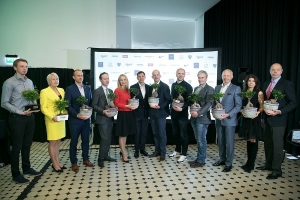 The President of the Estonian Olympic Committee, Urmas Sõõrumaa stressed the importance of cooperation and common objectives. "Everything that is good begins from ourselves, and each and every one of us has an important role to play in building and maintaining great things. I’d like to thank the sponsors, who have supported the EOC for years and the sponsors, who join the Olympic family today. Sponsorship creates a direct relationship of giving and receiving, which is remembered by a whole generation. Together, we will give our contribution to developing elite and youth sports, in order to make sure that the Estonian flag flies high at major sporting events in the future too, and to the development of sports for all, so that the Estonian people could live longer, healthier and happier. Great things start within each of us," said Sõõrumaa.

During the new Olympic cycle in the years of 2017-2020, the Estonian Olympic Committee's long-term contributors continue as sponsors: gaming portal PAF, insurance company ERGO; outdoor advertising company JCDecaux; Monton and Nike, who clothe the Olympic delegations, and the Olympic Casino. The new sponsors to join the movement are the local trade group Coop; automotive partner Toyota Baltic, and security company USS Security. The total volume of sponsorship agreements is 2.6 million euros, which will be channelled into developing elite sports, youth sports and sports for all.

As a significant landmark in the anticipation of the Winter Olympic Games, the Estonian Olympic Committee signed the response to the official invitation of the International Olympic Committee to participate in the PyeongChang 2018 Olympics; the national team will be confirmed in January 2018. In addition, an agreement was signed with Sportland, the biggest sporting goods retail chain in the Baltic countries. They will supply the Estonian Olympic delegation with competition clothing – in PyeongChang, Estonians will compete for the first time in Salomon brand clothing. The ticket partner of the Winter Olympics is Estravel.

The Estonian Olympic Committee operates as an umbrella organisation for the development of elite sports, expanding the critical mass of youth sports, and in the name of promoting sports for all, while following the Olympic values and the rules of fair play. The work of the EOC is supported largely by Estonian companies. EOC's sponsors are PAF, Coop, ERGO, JCDecaux, Monton, Nike, Olympic Casino, Toyota Baltic, and USS Security.