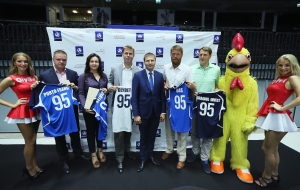 Olympic Entertainment Group AS and the Estonian Volleyball Federation signed a partnership agreement on OEG supporting the Estonian volleyball national team for the next three years.

The agreement was signed by Madis Jääger, Member of the Board of Olympic Entertainment Group, and Hanno Pevkur, the president of the Estonian Volleyball Federation.

“OEG has always been a major supporter and fan of Estonian sports and we deem it a great honour to contribute to the development of Estonian volleyball. The Estonian national team showed us beautiful and victorious games at the subgroup tournament of the European League this year and we hope that our support will provide an extra contribution that would ensure success for the national team at the final tournament soon to begin, that can in its turn open the door to the World League,” Madis Jääger said.

According to the president of the Volleyball Federation Mr. Hanno Pevkur the support of large companies is very important to Estonian volleyball and it has an iconic significance. “I would like to express my deep and sincere respect to all these wonderful enterprises who decided to support the most successful ballgame team on its way to the final tournament of the European Championship. Their support is extremely important to Estonian volleyball, showing the trust enterprises have in Estonian sports,” noted Mr. Pevkur at the signing of the support agreements.