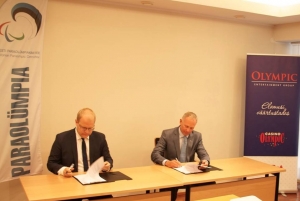 Urmas Paet, the President of the Estonian Paralympic Committee, and Armin Karu, the Chairman of the Supervisory Board of Olympic Entertainment Group, signed a sponsorship agreement today, expressing the company’s commitment to support the coaches of athletes with special needs.

OEG has been a major supporter of the Estonian Olympic Committee for years. "We value an active and determined lifestyle and therefore it is somewhat logical to extend our sponsorship activities to include the Paralympic movement as well," noted Armin Karu, the Chairman of the Supervisory Board of OEG, about the reasoning behind the freshly signed sponsorship agreement. He expressed his hope that the partnership will pave the way for Estonian athletes to achieve Olympic medals in the coming years.

According to Urmas Paet this is a very significant agreement that allows the Estonian Paralympic Committee to support the hardworking coaches whose dedicated efforts are essential for a chance to win any medals at the Paralympics. Mr. Paet underlined the significance of the agreement and expressed his hope that many other companies will follow the lead of OEG.