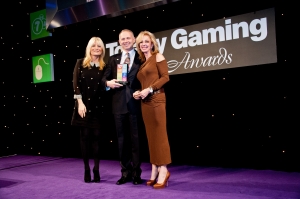 Olympic Entertainment Group was rewarded with the “Best Land-based Casino Operator of the Year” title at the Totally Gaming Awards held in London this February. The award was presented to Armin Karu, the Chairman of the Board of OEG, by Jan Jones Blackhurst, the Executive Vice President of the Caesars Entertainment Corporation.

Besides OEG, the finalists for the best land-based casino operator award included three renowned operators such as Casino’ Campione d’Italia, Grosvenor Casinos, and London Clubs International that belongs to the Caesars Entertainment group. In addition, OEG’s Olympic Casino Eurovea located in Bratislava, capital city of Slovakia, was among the finalists in the “Best Land-based Casino of the Year” category.

According to Armin Karu, the Chairman of the Board of OEG, the award is a true recognition for the years of hard work by the whole team of OEG. "Last year showed that the right decisions and all our efforts made during the years of global economic crisis had given us a strong competitive advantage and comparing to the period before the recession, we have increased market shares in almost all of the countries where we operate," Karu explained. "Last year was also remarkable for entering the Italian market and breaking into the so-called Old European market, where we now aim to gain even more foothold," Karu said.

The Totally Gaming Awards are one of the gaming industry's premier award events, held in conjunction with ICE Totally Gaming, the world's most complete gaming exhibition taking place at ExCeL London. Totally Gaming Awards are designed to acknowledge the innovative and excellent products and services in the gaming industry. The event was held in collaboration with the European Casino Association (ECA), the National Casino Industry Forum (NCiF) and the Remote Gambling Association (RGA).

PHOTO: The “Best Land-Based Casino Operator of the Year” award was presented to Armin Karu, the founder and the current Chairman of the Board of OEG, by Jan Jones Blackhurst, the Executive Vice President of the Caesars Entertainment Corporation.