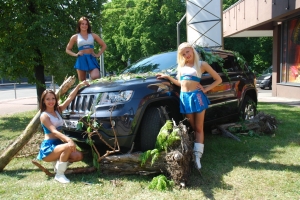 Last night the main prize of Olympic Casino’s annual draw went to Mrs. Veera (66) living in the Mustamäe district in Tallinn, who became the owner of Jeep Grand Cherokee.

“I don’t have a driver’s licence, but now I have a reason to start learning to drive. I am enjoying the summer and taking care of my business in Moscow, and a large and safe jeep would be perfect for moving about there,” said Veera.

Veera has been visiting Olympic Casino for the last seventeen years. She has scored a couple of slot wins amounting to about ten thousand Euros, but no major wins as yet.

“It seems that it really pays to be patient and persevere. Although I had thought that in my case I was simply a fool to keep hoping,” Veera retorted.

Last night the draw in Reval Park Hotel & Casino in Tallinn consisted of two rounds: 37 finalists were first drawn among all tickets in a virtual environment and then the winner of the main prize was established on the roulette table. The draw was broadcast to all Estonian Olympic Casinos.

In the last 15 years Olympic Casino has drawn fifty cars among its customers, all in all worth nearly a million Euros. As far as we know no other enterprise operating in Estonia has drawn such a large number of cars worth so much.

The cars put up as prizes have included for example Audi A5 Sportback, 5th series BMW, Volvo XC60 and Range Rover Evoque. The most valuable main prize was the top car of the Mercedes range worth more than a million kroons. The wins have been distributed to nearly all the counties in Estonia. Actress Liina Tennosaar for example won a silver Audi A6 worth more than 40,000 Euros at the draw a year ago.

Olympic Casino is the leading provider of casino entertainment in Estonia, operating 18 slots casinos in Tallinn, Tartu, Pärnu, Narva and Jõhvi. Founded in 1993 the company now employs nearly 530 people. Olympic Casino is a full member of the European Casino Association and a major sponsor of the Estonian Olympic Committee.