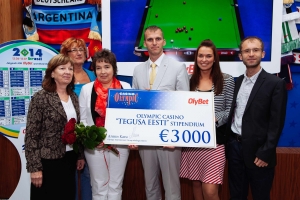 The ‘Tegus Eesti’ grant awarded by the Estonian Social Enterprise Network (SEV) and Olympic Casino went to Randvere Tööõppekeskus that has been providing labour market services to less competitive people since 2006.

Randvere Tööõppekeskus has provided professional practice services to nearly 70 long-term unemployed people, with 30 to 35 of them currently employed as far as they know. Welfare services are taking care of 20 people with special needs, including four who have been provided accommodation in the centre, six have found jobs, ten are provided assistance to cope with everyday tasks and four youths with special needs are provided care services, enabling their families to continue working.

The grant will be used by Randvere Tööõppekeskus to acquire a Designer TOPAZ 50 sewing and embroidery machine, and two girls with special needs will be employed to make various decorations for textile goods on the embroidery machine and produce anniversary cards.

“The local authorities in Saaremaa have already shown interest in ordering baby supplies and also anniversary cards for the elderly living in their parishes. Several enterprises in Saaremaa are ordering gift bags for their employees. With this machine we can create added value for these goods," Liida Kaare added.

“Creative and practical handmade items from car seat covers to anniversary cards, with buyers already lined up? The grantee with the highly viable business model sets an example to many others who would like to help less advantaged people,” remarked Jaan Aps, Member of the SEV Board. “The public sector is only getting set to start implementing the labour reform. It is yet unclear whether it can provide any practical help to preserve and create jobs. That is why the contribution made by a responsible enterprise to expand one success story is particularly valuable.”

The grant fund ‘Tegus Eesti’, created by the financial input of Estonian Social Enterprise Network (SEV) and Olympic Casino, is providing recognition to socially active initiatives that have been operating for at least a year and have distinguished themselves with their courage and initiative. The ‘Tegus Eesti’ grant is awarded twice every year. The next application round starts in the beginning of October.

The first enterprise to receive the grant was MTÜ Tagurpidi Lavka in the autumn of 2012, helping farmers to sell organic goods to townspeople without any intermediaries. In November of the same year the grant fund of ‘Tegus Eesti’ awarded a grant of €3,000 to MTÜ Rosma Haridusselts promoting Waldorf education. The grant was used for stimulating local development by creating new jobs and places for children in kindergartens.

Last year the grant was used to open a new massage centre of the Estonian Blind Massage Association, providing work for up to 15 blind masseurs. In the second half of the year a grant was awarded to MTÜ Hingerahu, aimed at bringing people with mental disorders or belonging to social risk groups to the labour market and keep them there, setting up a woodworking workshop for them in Pärnu.