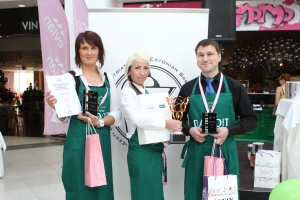 Kelly Papp from Olympic Casino was the overwhelming winner of the Estonian Barmen’s Championship in the category of non-alcoholic cocktails. The Championship took place in Kristiine Keskus on May 27.

The best cocktail maker will be the Estonian representative in the non-alcoholic cocktail competition taking place in the Czech Republic this fall. Helen Patsula from Tartu Püssirohukelder was awarded the title of the best young bartender (in the age group of up to 27 years) and she collected the award of a trip to France and a visit to the Monini factory.

The Evian and Badoit competitions arranged in honour of the 18th anniversary of the Estonian Bartenders Association (Eesti Baarmenite Assotsiatsioon, EBA) included 14 best cocktail makers from all over Estonia; they were rated for their cocktail making technique and the taste of the drink. The cocktails were rated by the most highly recognised sommeliers in Estonia. A children’s jury also picked their favourite cocktail. The competition took place in the atrium of the centre, with the audience entertained by hostess Tanja Mihhailova and cocktail making workshops for children.  Männiste family band performed at the event.

• Thyme and fresh cucumber for decoration.

EBA was founded in Viru Hotel on May 26, 1994. There have been annual EBA championship competitions since 1995 and the winner represents Estonia at the international World Cocktail Championship starting from the year 2000. EBA has been a full member of IBA since 1999.