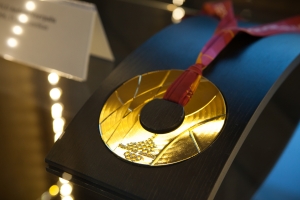 An exhibition displaying the medals of the three most successful Estonian athletes at the last three Winter Olympics opened today in the OlyBet sports bar located in Kristiine Keskus in Tallinn. The display includes medals awarded to cross-country skiers: the gold medal won by Andrus Veerpalu in Turin, the silver medal won by Kristina Šmigun-Vähi in Vancouver and the bronze won by Jaak Mae in Salt Lake City.

Generally the medals won by our winter sportsmen at top competitions are displayed in the Winter Sports Museum in Otepää, but now one set has travelled to Tallinn for the duration of the Sochi Olympics.

Mr. Daimar Lell, the director of Estonian Sports Museum, said that Olympic medals have been shown before at temporary exhibitions in Tallinn, but there have been more opportunities to view summer awards. “Medals of Winter Olympics were last in Tallinn for a longer time in the summer of 2010,” he added.

The display created in partnership between sportsmen, OlyBet and Estonian Sports Museum provides all Olympics fans living in North-Estonia an opportunity to view the medals of the previous games in one of the most popular centres in Tallinn during the Sotchi Games.

The exhibition of the Winter Olympics’ medals is open in the OlyBet sports bar. It is separated from the casino and thus open to visitors without the need for prior registration. Although regulations require that any visitors of a sports bar must be 18 years of age or older. The exhibition of Olympic medals will be open up to the end of February.

In addition to the exhibition of the Winter Olympics’ medals the OlyBet sports bar will host the transmissions of the Postimees Olympic Studio starting from this Friday evening every morning at 9:20 a.m. and every evening at 6:15 p.m.