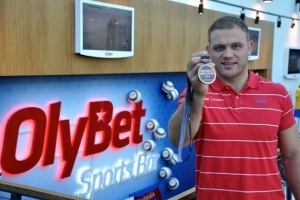 Recently returned from Tashkent the Estonian top wrestler Heiki Nabi brought his new medal – the bronze from the World Championships – to be displayed in the OlyBet sports bar in the Kristiine shopping centre. The medal was placed in an impact-proof secure cabinet made by special order for such exhibitions and kept under security surveillance on the ground floor of the OlyBet sports bar. The exhibit is opened today, September 19.

“This was certainly the most important medal of the season, but I don’t intend to have a rest yet. I must fly to club competitions in Germany right away and next I will take part in the World Championships of the military in Philadelphia,” said Nabi at the opening of the exhibition.

This spring sports fans already had the chance to view some medals Heiki Nabi has brought home when the long expected second World Champion’s gold medal won by Heiki Nabi last year in Budapest arrived in Estonia That occasion was celebrated by an exhibition open from April to May in OlyBet sports bar, with a display of two World Champion’s gold medals and an Olympic silver medal.

The OlyBet sports bar in the Kristiine centre is setting up exhibitions of Estonian sports relics all year round. In the beginning of the year the bar showed a display of Erika Salumäe’s medals brought from the auction in London. Estonia’s finest Winter Olympic medals – gold by Andrus Veerpalu, silver by Kristina Šmigun and bronze by Jaak Mae – could be viewed in the bar immediately before the Sochi Olympics.

The OlyBet sports bar in the Kristiine centre is separated from the casino also located in that centre and thus open to visitors without the need for prior registration. The minimum age limit for entering a sports bar is 18 years The exhibition of medals won by Heiki Nabi will be open up to the end of this autumn.