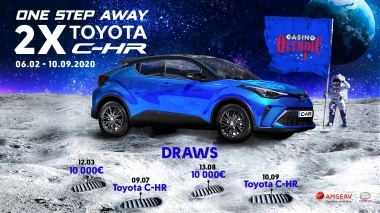 The description, conditions of participation and procedure of the additional game of chance

Place, procedure and dates of the draws.

The finals of the additional game of chance take place in the Olympic Park Casino (Kreutzwaldi 23, Tallinn) with a live broadcast in all the other OEG gaming halls on the following days:

NB! If the restrictions introduced by the Estonian Government are lifted:

In each casino a draw starts from the paper tickets basket. If a customer, whose ticket was pulled out of this basket has made a visit in accordance with point 4.2 or the restriction introduced by the Government of the Republic of Estonia will have been lifted and this customer is present, then they advance to the final. If they are not present in the casino or they have not registered in accordance with point 4.2, then a new ticket is immediately selected from the same casino’s virtual tickets basket, its holder has a chance to advance to the final, provided the meet the criteria stated in points 4.2 and 4.3. Tickets are pulled out in turns out of paper and virtual tickets baskets until a finalist from this casino is selected.

On top of thatб because of these closures, on 09.07 finalists from these casinos will be selected in the nearest casino (the paper tickets will be delivered there).

ü  Marja tickets will be moved to the Olympic Casino Kristiine.

ü  Ümera tickets will be moved to the Olympic Casino Mustakivi.

ü  Jõhvi tickets will be moved to the Olympic Casino Narva Fama.

NB! During this part only tickets accumulated in a particular casino participate. For example: If there is a draw in the Olympic Casino Pirita and amongst the paper tickets there is a ticket with the OIympic Casino Nautica’s stamp, then this ticket is declared void, it does not participate in the draw of the additional game of chance and a new ticket is drawn out.

Paper tickets collected in those casinos, that have closed on 01.06, will be moved to the nearest Olympic Casino by the time of the of draw (09.07) as follows:

In those three casinos, there are 2 separate baskets.